The history starts around 1998 and two years later the first and the only demo was recorded and released with tittle – …and from Flesh to Bone (2000). The demo was recorded by a trio – Pygo, Halmo and Šuška, only the bass was recorded by Paľo Ondriš (Nekultúra). The first long-playing album It Nots Not Cut Out – It Can´t Be Eaten meant that the band expanded to the quintet, when they were joined by bassmaster Shampoo (Attack of Rage, ex-Eternal Bleeding, ex-Darkside, ex-Extasy)
and also second guitarist Peter Szemenyei (ex-Extasy). The last named member did not see another album, so Cut a Piece for Your Hunger was recorded by a classic four. During this period band played on festivals such as Brutal Assault, Obscene Extreme, Mountains of Death and Drachten Deathfest and many more. Pygo was no longer involved in the recording of the third album, so a new throat had to be found. On the album Catharsis recorded in 2009, new vocalist the pseudonym Wewer stood behind the microphone, and overall the album was in a different spirit than the previous work. It wasn’t such a grumpy death metal, but the album carried a rather raw and cool sound, which was heard especially on the drums. Also, Wewer’s vocals did not reach as deep as the Pygo‘ s . The album did not meet with such great understanding with fans and after a while Pygo returned. For a while, both singers were in the band, but in the end Pygo became independent again. The year 2013 was marked by the release of the new album Supply of Flesh Came Just in Time, which was also described by Nori from Kraanium as the definition of the slam genre. It was similar two years later with the latest full album Overgorged Flesh Flies Dying Slowly. The album kept a high standard, but did not reach the quality of its predecessor. The band continued with active concerts and in 2017 they also released a compilation of the first three albums called Old Poetry of Rotting Flesh relaesed by Bizarre Leprous Production. During this period, Pygo left the band again due to the workload, and for two years the young new singer Adrian from Kosica (east Slovakia) joined the band. In 2019 Pygo returned again to the band and nowadays the group works on new material to be release hopefully this year (2021). 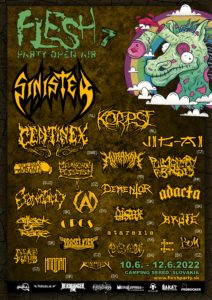